IPv6 and the Future of Podcasting 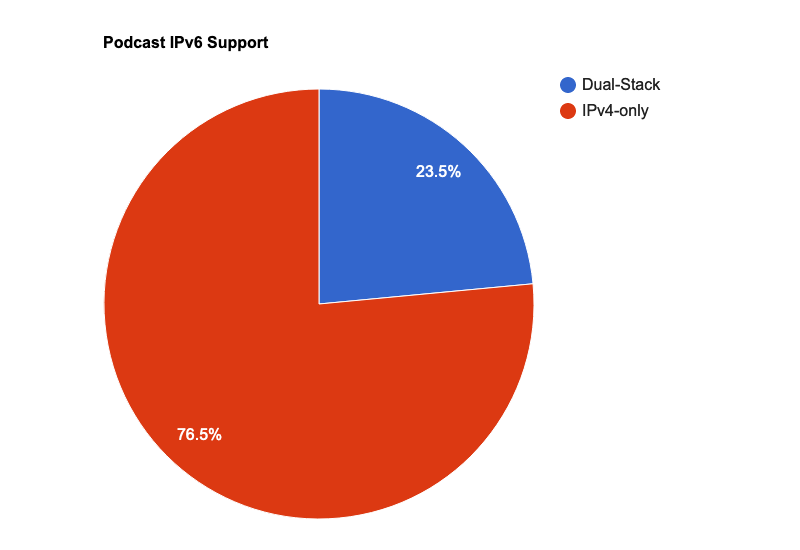 The majority of podcasts are hosted on IPv4-only networks as of March 2021. This has a negative impact on content availability, especially in emerging markets that lead the world in IPv6 adoption.

Internet Protocol Version 6 (IPv6) was introduced 26 years ago in 1995 as a replacement for IPv4. IPv6 was primarily designed to solve the impending exhaustion of the 4.3 billion total IPv4 addresses. For context, the world population in 2021 is 7.9 billion. Clearly not every person, let alone every device, would or could have their own IPv4 address. With IPv6, there are a total of 3.4×10³⁸ addresses which by some calculations should be enough for 69,683 years.

In anticipation of IPv6 rollout, many websites began to launch dual-stack configurations, meaning they support both IPv4 & IPv6. In addition, telecommunication companies invested in transition technologies and infrastructure like NAT64 and 464XLAT to ensure that services like Skype, which were IPv4-only, would continue to work for users on their IPv6-only networks.

Now in 2021, IPv6 is the dominant protocol in many countries like India where two thirds of all internet users are connected over IPv6. Strong telecom competition has lead to plummeting data prices, which in turn has lead to cost-saving measures like deploying single-stack, IPv6-only 4G LTE networks to reduce the overhead of operating and maintaining infrastructure like NAT64 at scale.

While many industries have prepared for the inevitable transition to IPv6, podcasting continues to lag behind. The Internet Advertising Bureau (IAB) technical guidance notably omitted IPv6 until January 2021 with the v2.1 update, and today the majority of podcast hosting companies do not support IPv6.

This delay was due, at least in part, to the IPv6 Privacy Extension that outlines a practice of rotating IPv6 addresses to avoid uniquely and permanently identifying a single user. Although IPv6 address rotation is beneficial for user privacy, it presents challenges to the IAB’s User Agent + IP Address measurement approach.

This added complexity, combined with a lack of revenue originating from emerging markets, has lead many podcasting companies to defer or deprioritize IPv6 support. Given that only 17% of podcasts supported HTTPS in 2018, unless an industry leader like Apple mandates IPv6 support, it’s unlikely that hosts will drive adoption themselves.

Sampling 10,000 podcasts that were updated in the past 2 weeks, we estimate that at most, 23.5% of podcasts support IPv6 1. Of the Top 200 podcasts on Rephonic, this number drops to just 15 (7.5%), suggesting that the majority of podcasts do not support IPv6 today.

As a podcast app for the next billion, PodLP listeners are primarily located in emerging markets where IPv6 is often the dominant protocol. Starting in v1.5.2, PodLP will intelligently adapt podcasts shown on the homepage & category pages based on network configurations and host reachability. Podcasts from IPv4-only hosts will no longer be promoted to listeners on IPv6-only networks, and existing subscriptions will show more detailed error messages.

The Future of Podcasting

Podcasting is growing around the world, and global audiences are increasingly accessing the internet (and thus podcasts) via IPv6. In parts of the world like the Middle East & Africa (MEA), smart features phones like those powered by KaiOS have shown 398% growth in Q4 2020. Should this growth continue, podcasters will have to pay more attention to IPv6 support when selecting a host.

If your podcast is targetted at subscribers in emerging markets and your host does not support IPv6, you might be missing out on listeners. Although the majority of podcast hosts do not support IPv6 today, a few notable hosts do like Buzzsprout and Anchor.

Keep in mind that analytics services like Podtrac and Blubrry do not support IPv6 at the time of writing. If your podcast uses these stats services, even if your host supports IPv6, subscribers on IPv6-only networks will receive a “connection error” message, preventing them from listening.

PodLP is a podcast player specifically built for KaiOS smart feature phones like the JioPhone. PodLP was one of 2020’s most popular KaiOS apps downloaded more than 5 million times with listeners in 175 countries. PodLP is available for free on the KaiStore and JioStore.

Throughout 2020, podcast creators have grown their listener base with sponsored podcast listings on the PodLP homepage. PodLP’s high-scale infrastructure makes it cost-effective for podcasters to connect with new subscribers all over the world. If you want to grow your podcast globally, send us an email at support@podlp.com.